The New Moon today,  the 21st of July, will create a Total Eclipse of the Sun.

Even though it will only be visible in the Northwestern United States, Alaska and Hawaii,  eastern India, Shanghai, Southeastern Asia and Northeastern Oceania, it will have a profound effect on all of humanity.

Peace on earth is more likely right now than ever before!

Do you believe that the alignment of the stars makes people a bit crazy from time to time?

I for one feel unusual astrological influences, usually BEFORE my astrologer friends share the sky news with me.

Well the sky news is pretty huge this month!

The Moon is much smaller than the Sun, but when it passes directly in front of the Sun, its’ magnetic energy is so powerful that it blocks the light of the Sun from the Earth by absorbing the light.

If you have done much reading around here, you know that the fuel you burn is electricity, and your emotions are magnetic.

My astrologer friends have been educating me that the Sun is electric energy and is masculine.

The Moon is magnetic energy and is feminine.

(Let me qualify that by saying that the only Astrologers I consult with are very spiritual people. Heck, for that matter every professional that I rely on is a highly spiritual person. I trust only those spilling love into the world. It’s a policy that has served me well.)

During a Total Eclipse there is a fusion of energy that occurs between the Sun and the Moon.

This has huge implications for the inhabitants of Earth, because you receive messages from God through your intuition when you can marry the feminine and masculine aspects of your being.

Humor me for a minute here, I’m not trying to get all woo woo on ya!

The fuel that drives you is masculine.

Your emotions which give you direction in your life are feminine.

It is not hard to imagine that the union of these 2 aspects will give you peace.

By uniting these two aspects of your being you are actually creating a devign union with all of life.

END_OF_DOCUMENT_TOKEN_TO_BE_REPLACED

The holidays are upon us.

I was raised catholic so Christmas time is full of Mid-night Mass memories.

In my adult life, I have observed and accepted many different religions.  Where there is love, I am at home.

Christmas to me means giving of yourself with a brand new spirit of good will, that will carry you through ‘til the spring time, when amazing things are possible.

Since I was born and raised in Montana, for me the winter thaw, followed by spring and new life is a powerful time.

Whenever you get caught up in your ego, spend some time with young children and animals.  They can really teach you something about being yourself.

A Child knows exactly who they are even when the adults in their life are wondering.

By the time they hit adolescence, you’ve got your hands full….but those early years are precious innocence.

Christmas Is for Kids is one of my favorite holiday songs.  My mom used to play it every year when I was growing up.

The song talks about adults returning to childhood with the spirit of Christmas.

Ya gotta love it.

If you can embrace the season with a child like innocence you will bring joy into the hearts of everyone you meet.

Magic and wonder are not given the credit they deserve, and happiness really is contagious! 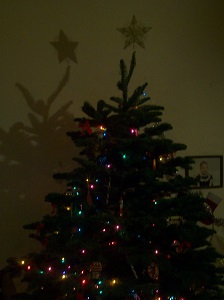 Are you finding yourself feeling depressed this holiday season?

In every culture, there are special days that bring back memories of home and loved ones.

Those special days can feel bitter sweet when you are dealing with loss.  The pain becomes intensified.

You don’t want to deal with happy people because you just can’t feel happy.  There is just no faking it.

Do you just wish the holidays were over?

Somehow, when the world is celebrating, loneliness is magnified.

John was a patient of mine for many years.  He absolutely loved the holidays.

His devoted wife was a beautiful energetic lady who was always busy doing something creative.  She had an unbelievable garden, lots of cats and dogs, she loved to bake and used to have a delicious care package to give me whenever I visited.

Every Christmas, she turned their home into a winter wonderland.  It was quite a treat, since the hot humid Hawaiian afternoon just didn’t feel like Christmas to this Montana girl!

I have fond memories of sitting at their kitchen table drinking hot cocoa with candy canes.  (With the air conditioning, it almost felt like winter!)

I remember Ida telling me about her challenges making her traditional Christmas dishes without salt.  John really looked forward to the family celebration, but usually ended up in the hospital before the new year.  To much salt, wine, and fun always did him in.

John would say, “Ida, I’m only gonna live once, it wouldn’t be Christmas without your famous Christmas dinner!”

Every year with the house looking like a post card, the two of them would greet their kids, grand-kids, and extended family for the wildest celebration you have ever seen.  My favorite part was singing Christmas carols by the bonfire.

Their family was full of so much love, you could feel it in the air.

Five years ago, John passed away a few days after Thanksgiving.

Ida faced her life without him.  She couldn’t celebrate the holiday.  Her family tried everything to get her to join them at their homes, or even a Christmas vacation for the whole family. END_OF_DOCUMENT_TOKEN_TO_BE_REPLACED 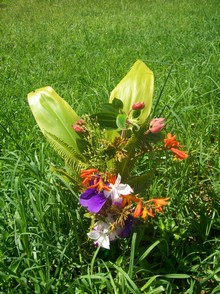 My three year old has been passionate about flowers since before he could walk.

Every now and then we spend time together gathering a bouquet to bring color to our home.

His awe of flowers is a precious thing to watch.

Is that innocent passion pure love?

Love is your soul’s directive.

Passion makes you wake in the morning with a twinkle in your eye.

If it is a positive passion, it will cause you to focus with intensity, and manifest positive experiences in your life.

Have you ever heard of the law of attraction?

You attract into your life what you focus on.  Passion certainly causes a very intense focus!

What is a positive passion? END_OF_DOCUMENT_TOKEN_TO_BE_REPLACED