There was recently a class action law suit filed against GlaxoSmithKline, the makers of Paxil, because “controlled release” tablets made between April 1, 2002 and March 4, 2005, contained a manufacturing defect that caused them to split apart.

Patient’s prescribed these drugs may have received the entire dose at once, or the time release portion of the pill without the active ingredient.

You should be concerned about Paxil side effects whether you took the pill back then, or you’re taking it today minus the manufacturer’s defect!

On March 22, 2004 the FDA issued an extraordinary Public Health Advisory that cautioned about the risks associated with the new generation of  antidepressants

The warning followed a public hearing at which dozens of family members of victims testified about suicide and violence committed by individuals taking these medications.

From agitation and hostility to impulsivity and mania, the FDA’s litany of antidepressant-induced behaviors is identical to those induced by:

(Drugs known to cause aggression and violence.)

These older stimulants and most of the newer antidepressants cause similar effects as a result of their influencing brain levels of the same neurotransmitter, serotonin.

A new FDA warning issued on January 31, 2008 declared that yet another group of chemical agents used to treat mood disorders carried the risk of “symptoms such as anxiety, agitation, hostility, mania and hypomania” which “may be precursors to emerging suicidality.”
This time the culprits are antiepileptic drugs – medications used to control seizures.
Because they cause sedation, these drugs are commonly used in psychiatry as “mood stabilizers.”
As a result of an orchestrated psychiatric campaign to diagnose children with “bipolar disorder,” increasing numbers of children are being given these drugs.
Be aware that all of these drugs work in the same way.
Paxil is contraindicated for patients younger than 18 because Paxil side effects are just too dangerous.  (Look it up!)
Is the profit to be made by creating addicts very early in life causing the irresponsible recruiting of young people?
This group of anti-seizure medications includes:

All of these drugs are being prescribed for varying psychiatric purposes, including the treatment of anxiety, depression and bipolar disorder.

“may experience worsening of their depression and/or the emergence of suicidal ideation and behavior (suicidal tendencies), whether or not they are taking antidepressant medications.”
In the most recent edition of Diagnostic and Statistical Manual of Mental Disorders, Fourth Edition, Text Revision  under Differential Diagnosis it states:
“Serotonin-specific reuptake inhibitor antidepressant medications may produce akathisia . . .” “Akathisia may be associated with dysphoria (restlessness, depression & anxiety), irritability, aggression, or suicide attempts.”

So you tell me,

Was it ethical for the FDA and GlaxoSmithKline to calm worries about these drugs by stating that worsening symptoms may occur with or without the medications? Look, if you feel like you are a danger to yourself, or that you are suffering with symptoms of mental illness, END_OF_DOCUMENT_TOKEN_TO_BE_REPLACED

Depression reminds me of a slow drizzle on a gray day.

I mean it isn’t something you would associate with a down pour.

We have had an unusual number of gray drizzly days.  Every time I look out my window I feel a bit depressed.

When I get out in the drizzle, I pull my coat around me tightly and hurry through my daily walk.

Well today, I looked up at the sky from my desk and wondered what kind of a walk I would have today.

Intermittent clouds threatened to make it soggy, and after the pounding rains last night, I wondered if I might need an umbrella.

By the time I put my shoes on and leashed up the dogs, it looked like the sun was going to shine down on us.

We hit the road with the cool trade winds blowing a light drizzle in our faces, and the sun warming our backs.

Right away I was struck by the loud sound of flowing water from a stream that had accumulated where there isn’t normally a stream.

Just the sound seemed to wash away my dark mood.

When we reached a part of the road where the flowing water traveled through the tall grass and splashed down small unseen water falls, it seemed like the sound was all around us.

The little stream that runs beside our daily walk had come to life during the down pour last night.

Where the new road is being plowed at the end of the pavement, there was glistening beauty, and sparkling playful waterfalls where the bare earth lie exposed yesterday.

I took the time to be still and breathe in the wonderful peaceful feeling the stream had created.

The flowing water seemed to have made the world pure and clean again.

My light mood was a gift from the storm.

Your symptoms of depression really can give way to an emotional storm that can wash away the wounds of the past if you allow it.

Mother Nature’s dramatic storm had washed the world clean.  When you let your emotions RIP… they are capable of washing YOU clean.

Whether it is excitement or intense grief, the shear power of the emotion can be felt in your gut, and often causes you to feel like if you don’t move or make some kinda noise, you will just burst.  Powerful emotions get your juices flowing.

If you suppress an intense emotion you can feel it rot your gut and climb up your throat.

Did you get the message when you are very young that it is not okay to express unpleasant emotions?

Stuffing your emotions will cause you much suffering.

Emotions are your spiritual compass.  They are meant to give direction in the moment they arise.

It is your choice to follow the direction your emotions point you, or ignore them.

When you choose to deny an emotion you prevent the release of that energy so it stays in you and harms you.

Emotional Facts You Should Know END_OF_DOCUMENT_TOKEN_TO_BE_REPLACED

Are You On a First Name Basis With President Obama?

Can you imagine referring to former President Bush as George?  The thought makes me chuckle.

Yet all over the internet, and elsewhere, I hear folks referring to President Obama as Barack, and the First Lady, as Michelle.

What is Facebook?  Do you know?  Michelle and Barack do!

Anyway…..  One of the first “tweets” I read was from a young woman saying, END_OF_DOCUMENT_TOKEN_TO_BE_REPLACED

It is a gray and rainy day on the Big Island of Hawaii.

I started the day with a conversation with a depressed (and depressing) friend.

It really set the mood for the morning.  My friends dark energy just seemed to cling to me.

When I took my daughter to the bus, the cold wind and pounding rain seemed to match my mood.

Last week when we were traveling down our road on the way to the school bus stop, my daughter was awe struck by the beautiful view, and grabbed the camera to take a picture through the wind shield, which was over due for a cleaning.

I was so surprised when I got home and took a look at the picture. 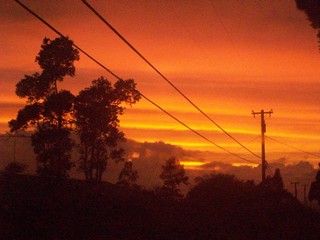 Through that dirty window, she had captured the awesome beauty of the morning.

I chuckled, and thought, “wow, awesome beauty shines so brightly, ya don’t notice how murky your field of vision is.”

It reminded me of life.  No matter how stuck in the mud you are, just keep your eye on awesome, and you will be transformed.

Today, just the memory of that beautiful morning shines a light on my dark mood.

You don’t have to be depressed.

Reach out to friends and family with the intention of uplifting spirits and you’ll find that is exactly what you’ll do!