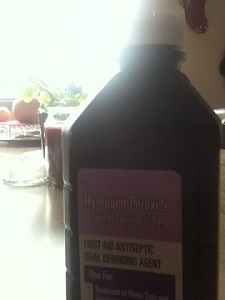 Have you ever used hydrogen peroxide therapy?

As the “Life Breath Coach” I frequently recommend it.  There are always a LOT of questions before Life Breath Club Members will actually put that recommendation into action.  There seems to be a lot of fear over this safe and simple remedy.

In their defense, if you “Google it”, you might be afraid to go ahead and give food grade hydrogen peroxide a try, too!

The FDA warns of stomach ulcers and there seems to be evidence that hydrogen peroxide destroys “new cells”.

“But wait, if the FDA is warning me that hydrogen peroxide isn’t safe, perhaps I should just leave it alone.”

Is that what you are thinking?

Hold On A Minute.  Unless …

That is, your body produces hydrogen peroxide.  It exists naturally inside your body!  It is composed of oxygen and water.

Hydrogen peroxide is actually a supplement, every bit as much as vitamins, minerals and oxygen.

Hydrogen Peroxide is FDA approved to be administered to you with a needle in your veins!

You should listen to the FDA

UNLESS you want to avoid drugs AND suffering!

Drugs are not the answer but hydrogen peroxide therapy very well could be.

It’s much like choosing your freedom with hydrogen peroxide therapy OVER choosing bondage with prescription medication!

Prescription drugs are very dangerous and if you take them you need to be aware that you may cause yourself harm by discontinuing your drugs without your doctors assistance.  Many drugs should be weaned.  Though, be aware that many drugs your doctor says you must take for the rest of your life are not scientifically proven to be necessary or even beneficial.

Psychotropic medications are over used for treating depression and many other complaints.  Be aware that they are VERY dangerous drugs.  If you choose to wean yourself from that type of medication be aware that the weaning process causes EXTREME emotional upheaval and instability.

The Life Breath Coach would never advise you to be unsafe!  You need to be aware of the dangers of prescription drugs!

So what’s all the hype about?

There is no legal issue with your doctor treating you with hydrogen peroxide therapy.

However, if your doctor mentions any diagnosis in association with hydrogen peroxide therapy they will shut him/her down so fast it will make his/her head spin!

Doctors give intravenous “Oxidative Therapy” legally in various clinics around the country.  They aren’t in every state and the FDA occasionally destroys a doctor over “making claims not FDA approved”.

It seems most folks think the only use for hydrogen peroxide is to clean a cut or abrasion, but that is incorrect.

Do you think it’s a good idea to pour peroxide on a fresh boo boo?

Actually, that might not be such a good idea.  Just flush the wound with normal saline.  Hydrogen peroxide probably isn’t all that helpful in this instance.  But it can be extremely helpful once the wound has closed.

Why should you be fearful of food grade hydrogen peroxide therapy?

The FDA warns you not to use 35% Hydrogen Peroxide is very dangerous!

I agree that it is dangerous BUT you aren’t going to use it until you dilute it!

Full strength house hold bleach is dangerous too, but the FDA is not concerned if you use it on your laundry.

Certainly, you should handle undiluted full strength hydrogen peroxide with as much care as you would house hold bleach.

You should also know that the FDA only approves of 35% food grade hydrogen peroxide for commercial fish growers to  help avoid causing illegal residues in their products.

So … the FDA warns you about 35% food grade hydrogen peroxide …

BUT it’s the ONLY treatment commercial fish farmers can use to avoid poisoning the general public!

It’s easy to create fear around hydrogen peroxide, but the truth is that it is the most helpful natural healing supplement you will ever find.

Both food grade and regular 3% off the drug store shelf hydrogen peroxide are amazingly useful.

Try this simple little tip, though it’s difficult to appreciate exactly how powerful it really is!

OR a large bottle of 3% drug store Hydrogen Peroxide IN YOUR BATH will cause massive healing!

A cure for gray hair?  That’s what they say, but the real benefit is that hydrogen peroxide easily increases your oxygen, and that is one benefit you will feel quickly.  Give this magic bath a try for yourself.  If you can’t swing a bath, then soak your feet!

The Life Breath Coach will be offering a month long workshop to help you utilize hydrogen peroxide therapy!

Join the Life Breath Club below to receive your invitation to a FREE preview call that will convince you that hydrogen peroxide therapy really is worth learning and applying so that you can get back to living your best life!

The “Easy Oxygen” preview call will help you understand all the benefits that hydrogen peroxide and other natural remedies have to offer!

Become a member today and then watch your inbox for your invitation to the free preview call!

Become a Member of the Life Breath Club